At the current (April) pace, the 100,000 milestone will be reached in June, a little later than previously predicted, due to the lower than anticipated number of apps published in April (a trend that is continuing in our early May data). Microsoft recently noted that some developers had reported slowdowns in the app approval and publishing process, which may be creating a bottleneck in app submissions. We also anticipate some slow down as developers work on making existing apps compatible with the reduced (RAM) Windows Phone 7.5 devices (e.g. Nokia Lumia 610) and as project workflow and timing begins to be impacted by availability of information about the next version of Windows Phone.

The graph below shows the growth in the total number of apps (content items) published to the Windows Phone Marketplace over the last 18 months. 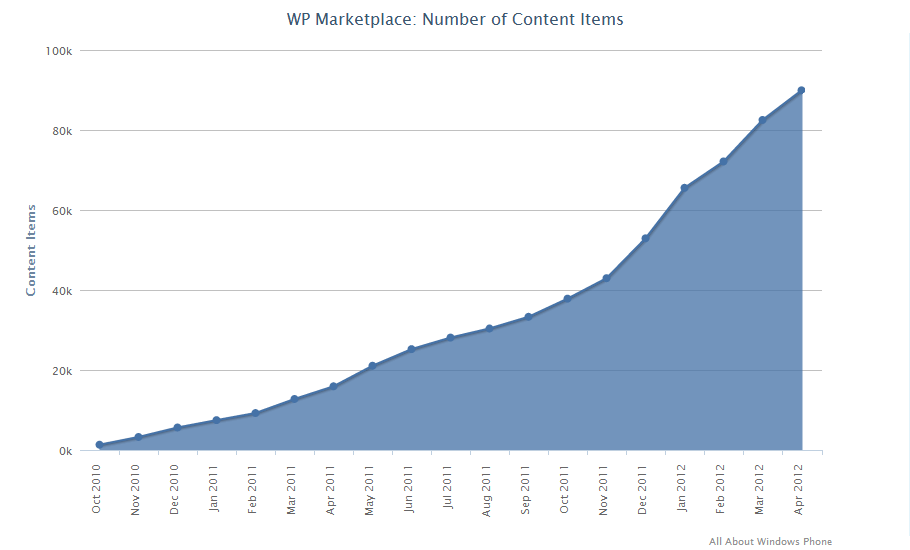 In common with other application stores, the total number of published items is not the same as the number of items available to consumers. Of the 92,383 items published to the Marketplace, just over 10,500 are no longer available (removed by Microsoft or withdrawn by the publisher).

Of these markets, China has enjoyed the strongest growth since our last report. This would suggest a combined effort by Microsoft and Nokia, to encourage existing developers to prepare their content for the Chinese market and to attract new developers from China, has been sucessful.

In April, an average of 340 apps were added to Windows Phone Marketplace per day. This was lower than January (375 per day) and March, but more than February (average of 250 per day) and significantly higher than the same time last year (105 per day). 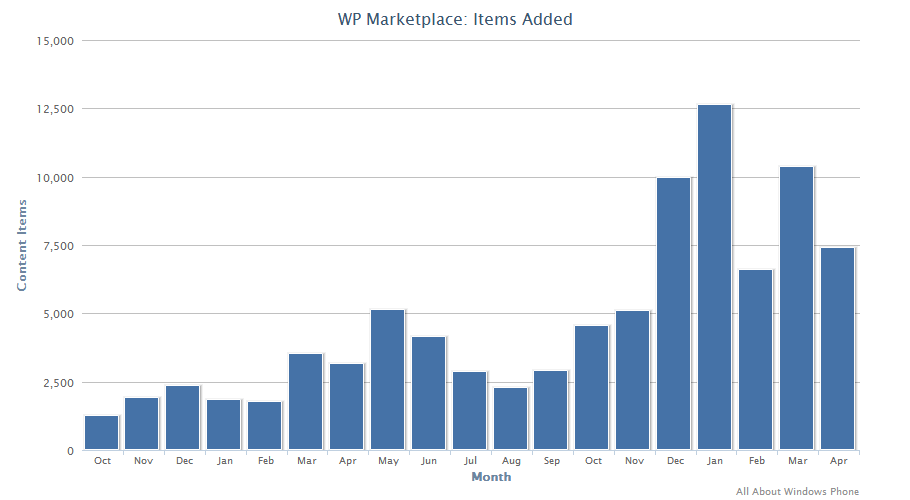 In January, we started looking at how many times an app has been rated as a metric. This can be seen as an analog for quality since only applications and games seen as useful are likely to be downloaded and rated multiple times (spam apps will be ignored). In the UK Marketplace (total 73,472) just over 5,800 apps have been rated 5 or more times. This means the proportion of quality apps is holding steady at just over 8% of the Windows Marketplace.

As we noted in our previous report:

There is a perception that Windows Phone is missing big name apps (e.g. Instagram, Words with Friends, Angry Birds Space). As the Windows Phone Marketplace moves towards 100,000+ apps, we expect to see a shift away from quantity metrics to quality metrics when assessing and commenting on app stores. This is overdue, but caution must be exercised as there can be a tendency to focus on the presence or absence of individual apps, rather than the overall picture.

Nokia's recent announcement of a number of exclusive app partnerships at CTIA is a good example of the way in which more attention is being paid to both quality and the presence of app brand. In addition, Microsoft recently announced a number of initiatives that favoured quality over quantity for the Marketplace. Despite this, the overall quantity metric remains important, with the total number of apps available continuing to be quoted in most key Windows Phone-related press releases.

There have been no major changes in the proportion of content by category in the last few months with all categories adding content approximately in proportion to their respective existing sizes. 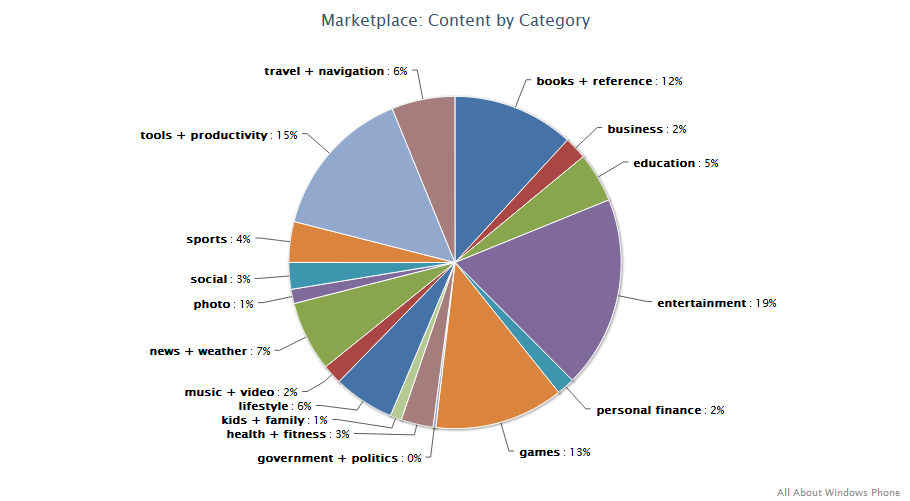 68% of items in the Windows Phone Marketplace are free, 10% are paid with a free trial and 22% are paid. The proportion of free apps has been slowly increasing (by a few percentage points) since the middle of last year. The wider availability of advertising SDKs for Windows Phone and an increasing willingness, by developers, to try ad-supported business models can explain most of this small increase. 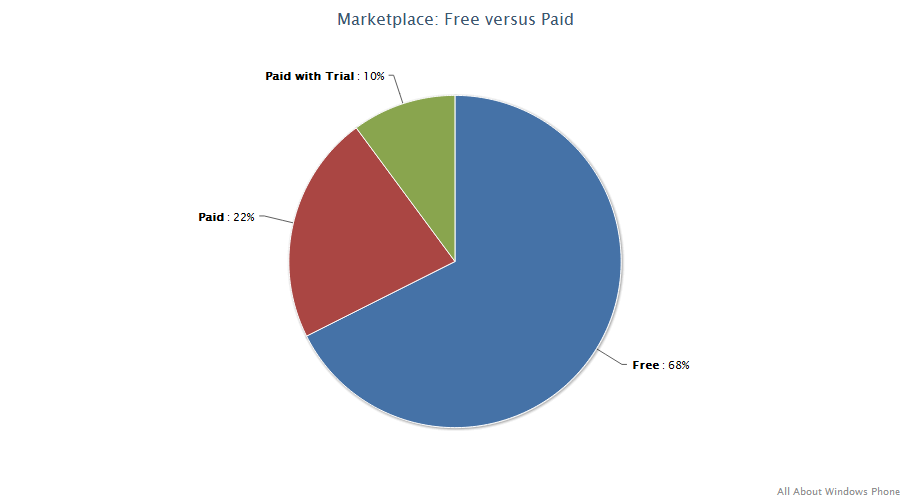 These numbers are from our own tracking system, which is also used to power the All About Windows Phone Apps & Games section, where you can browse applications and games, and install them via links to the web-based Marketplace, or directly by scanning the QR Code with Bing Vision on your smartphone.