After surfacing in various rumours, the Samsung ATIV SE has appeared on the Verizon website, with little in the way of an official fanfare announcement. The handset, which is exclusive to the US network and becomes Samsung's flagship Windows Phone device, is scheduled to start shipping next week. At launch it will be running Windows Phone 8.0, but is likely to be one of the first devices to receive the Windows Phone 8.1 update over-the-air (May or June).

The ATIV SE, essentially a successor to last year's ATIV Odyssey, is available on a two year contract, with an up front fee of $199. It has a five inch full HD (1080p) screen and, like the Lumia 1520 and Lumia Icon, is based around the Snapdragon 800 SoC (quad-core processor running at 2.3Ghz with 2GB RAM). Other key specifications include a 13MP AF camera with flash, 2MP front facing camera, 2600 mAh battery, and 16GB of on board memory complimented by the presence of a microSD card slot (supports up to 64GB). 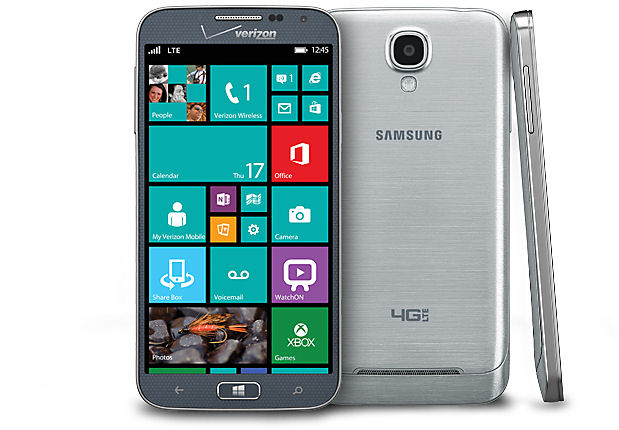 The design of the ATIV SE mixes elements of both the Android powered Samsung Galaxy S4 and Samsung's previous Windows Phone powered devices. Samsung's re-use of the Galaxy S4 design in the ATIV SE, echoes a similar pattern from the Galaxy S3 and the ATIV Odyssey (ATIV S in international markets). However, both set of Windows Phone device do have design tweaks. The most noticeable of these are the navigation key controls, consisting of capacitive search and back keys and a physical button Windows key.

The positioning of the volume controls, front facing camera, and front facing sensors is also common between the two devices, but it is notable that the ATIV SE, unlike the ATIV Odyssey, has dropped the camera capture key. Until recently, this was a hardware element that was required by Microsoft, but has since been dropped as part of a wider relaxation of hardware and design requirements for Windows Phone devices.

While the ATIV SE is exclusive to Verizon it is probable that Samsung will also release a global variant of the device. This would be equivalent to the release of the Samsung ATIV S and the Samsung ATIV Odyssey last year. However, it is currently unclear if (and for how long) Verizon has an exclusive on the new device.

Full specifications for the Samsung ATIV SE on the Verizon website.