Review: Perfect Tube hits the ground running, but still work to do

For a mobile platform 'without a YouTube client' (i.e. an official app from Google), Windows Phone sure has plenty of YouTube clients provided by third parties. And now the free Perfect Tube joins the fray, from the same developer as Perfect Music, reviewed here. And, like the music player, it's something of a triumph in terms of UI but ultimately slightly let down by real world performance and implementation in places, on my test Lumia 930. 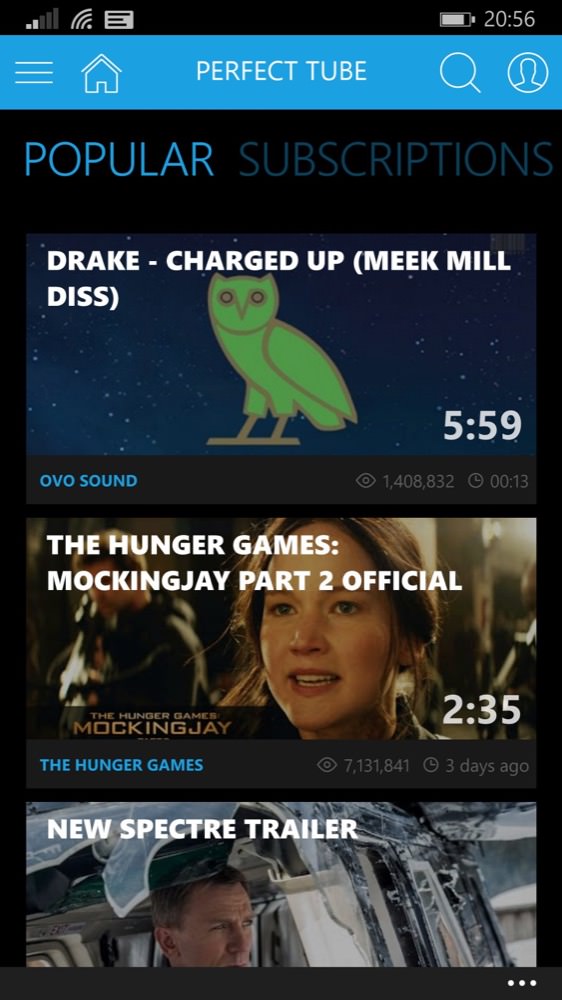 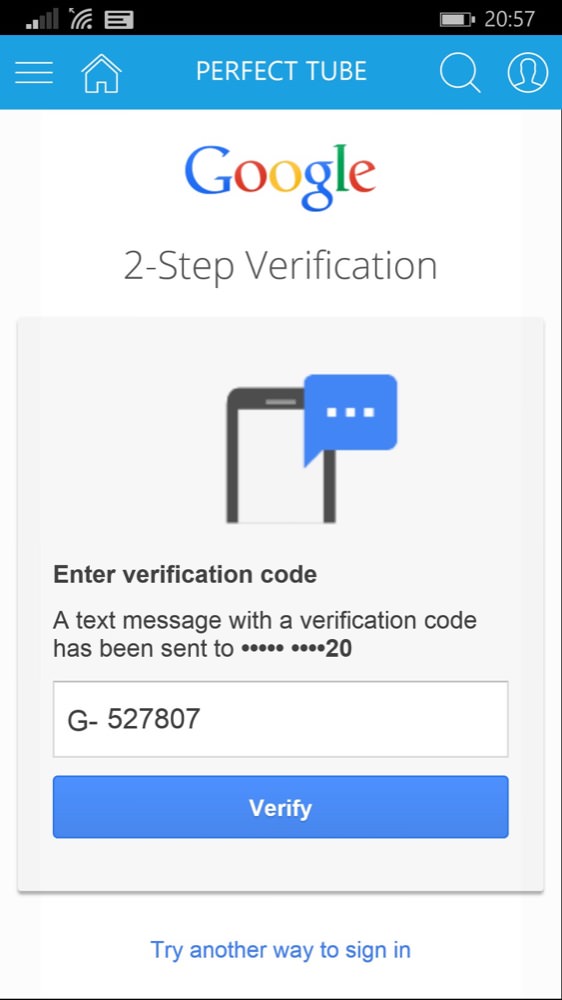 From the Windows 10 Mobile-ish UI to the slickness of general operation, Perfect Tube impresses. If someone had told me that this was Google's official client I would have believed them, the interface is so obvious and with no unpleasant surprises along the way. Of course, it's not 'perfect', rather belying the name, but then I'd bet that Google's attempt on Windows Phone wouldn't have been either, so..... The problem for Perfect Tube is that it's competing with the likes of myTube!, Tubecast Pro and Metrotube, to name but three, each of which is significantly more mature.

However, Perfect Tube will get 'there' - or at least I hope it will, since of all the YouTube clients on the platform, this is the one with the easiest and most logical interface. It's telling that there's no Settings option anywhere - the developer hasn't given the user any chance to alter the app's operation, because he genuinely believes that it's 'perfect' as it is. There, that word again! 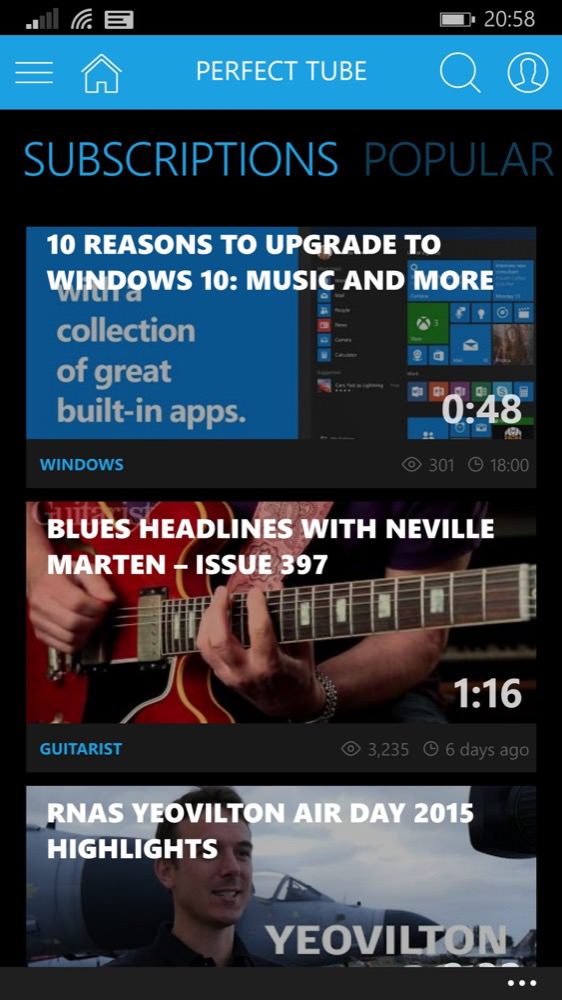 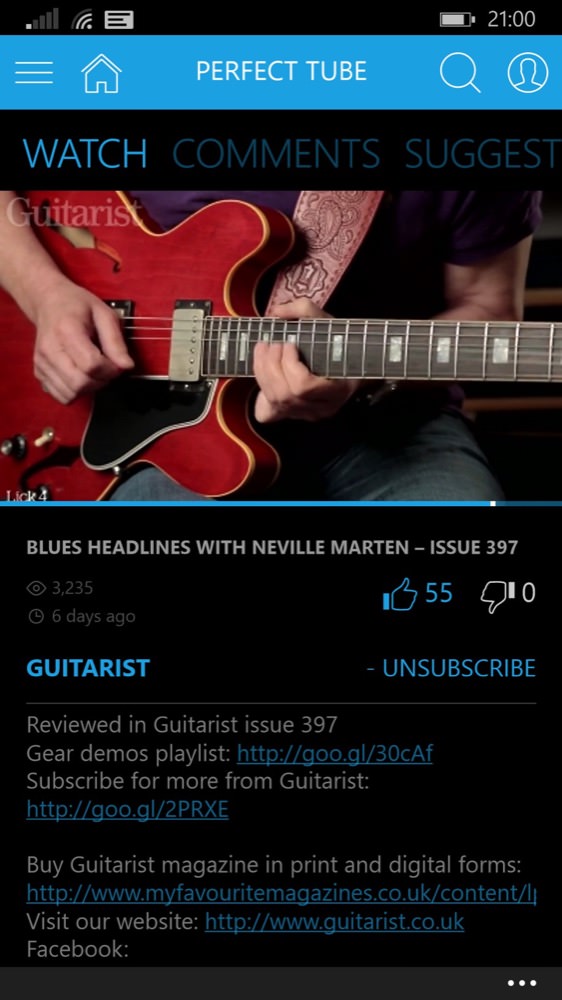 Once signed in through OAuth (with two step verification if needed), your 'Subscriptions' and 'Popular videos' form the main panorama, with 'Watch', 'Comments' and 'Suggestions' form the panorama once you've tapped through. It's all tastefully rendered in a dark theme and with icons and design cues from Windows 10 Mobile. YouTube videos auto-play, which is handy as that's mostly what you'll want to do, with intuitive controls that I'll come back to in a moment.

The top toolbar brings in a hamburger menu (for YouTube categories), a 'get out of trouble' Home shortcut, a search tool plus everything to do with you, your account and your preferences. Search for a video or text string on YouTube is fast and accurate, with full width graphical thumbnails to help you spot the video you're after.

Of special note is that, when browsing Perfect Tube's interface, any video that's playing with continue to play, in a small thumbnail window bottom-right, just like the Google client on Android. And, like the latter, it can be stopped and dismissed with a swipe, albeit in this case off to the left. 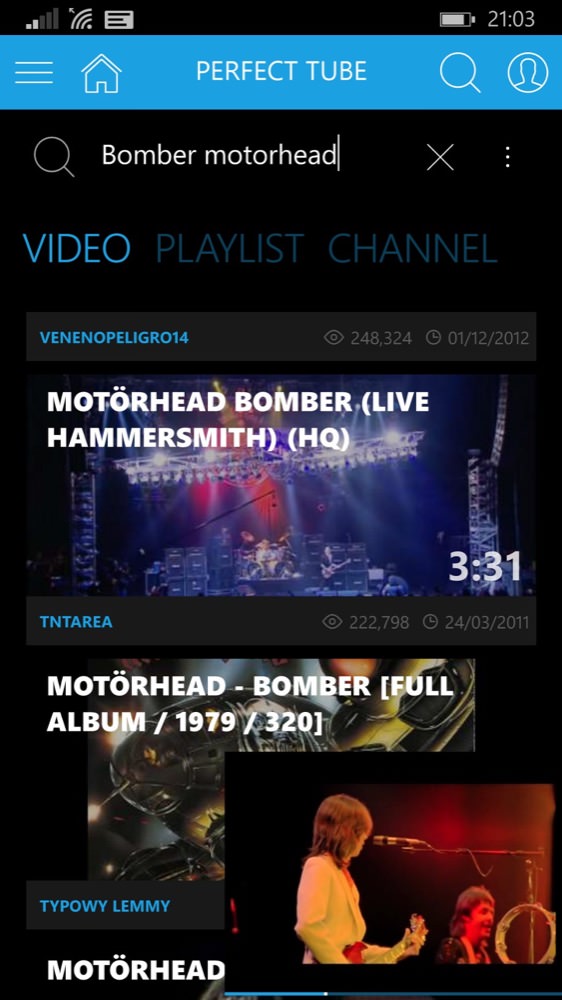 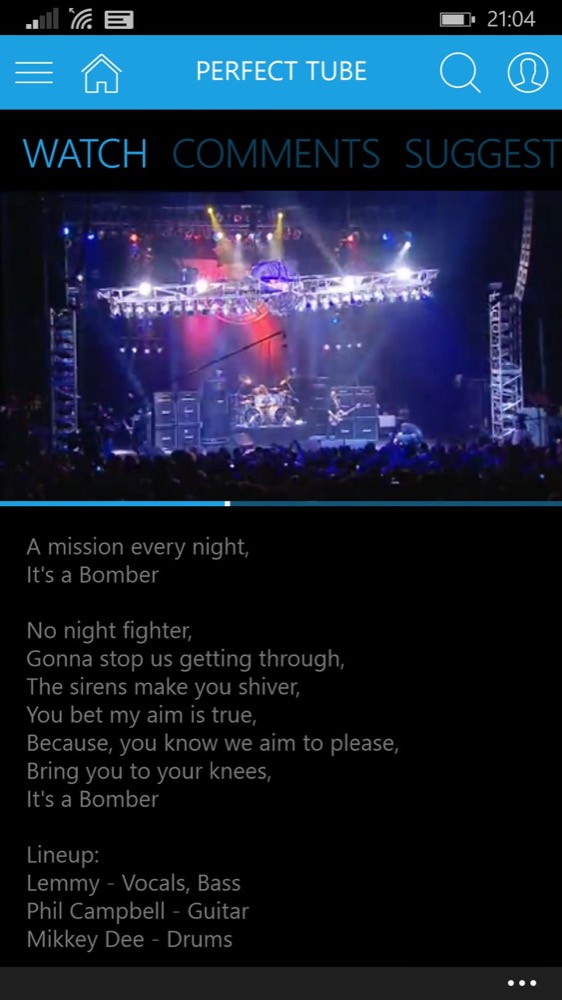 Handily, the length of each video found in a search is shown - quite often you'll have an idea of the length of the clip you're looking for and can eliminate anything that's much shorter or longer. And if you're not sure what to search for and just fancy a browse then the aforementioned hamburger menu comes in handy, overlaying the familiar top level YouTube categories. 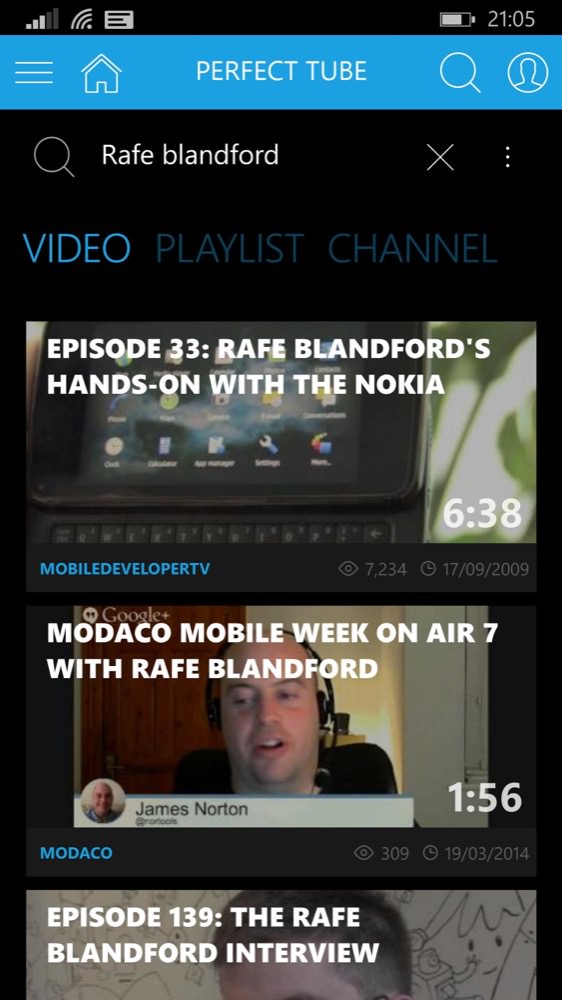 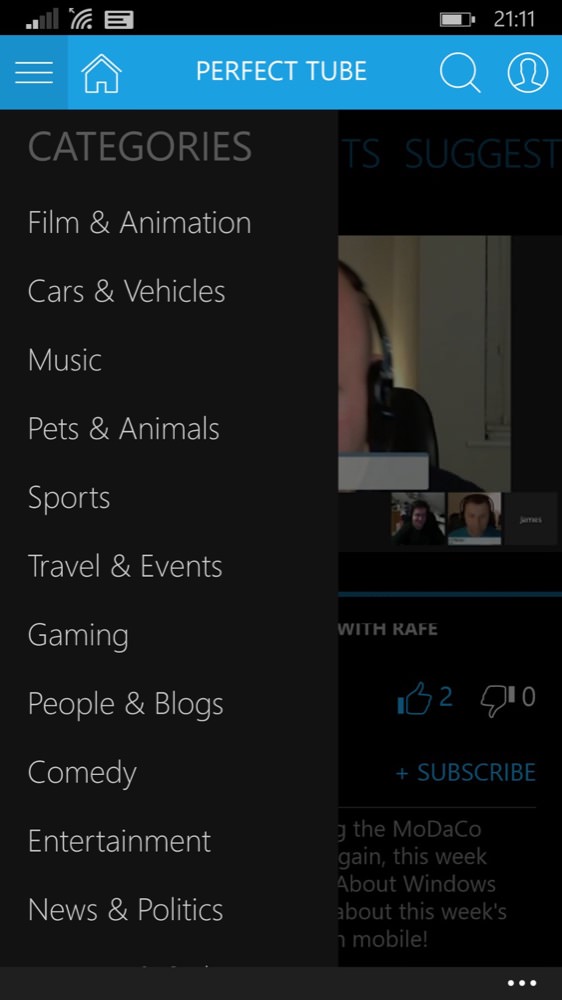 One of the more intuitive aspects of Perfect Tube is the control in the playback window, whether portrait or - with a tap on the full-screen control - landscape. In addition to the resolution control buttons and media playback controls, a swipe horizontally adjusts the playback position (in theory) and a swipe vertically adjusts the volume. 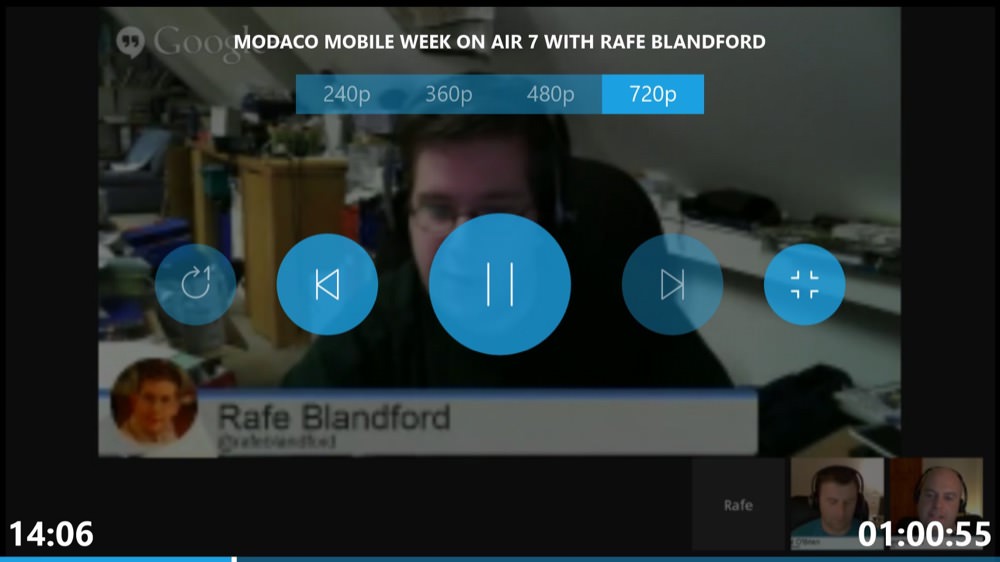 Well, that's the theory anyway. In practice, after a few adjustments it's very easy for these controls to have no, or an erratic, effect - I'll come back to this in a moment.

The Account pane, accessed using the top right control, has the usual YouTube sections tied to your login, and even includes 'uploaded', with a button (not shown) to upload new video content within Perfect Tube. Favourites come up perfectly, in the order in which you added them to your YouTube account. 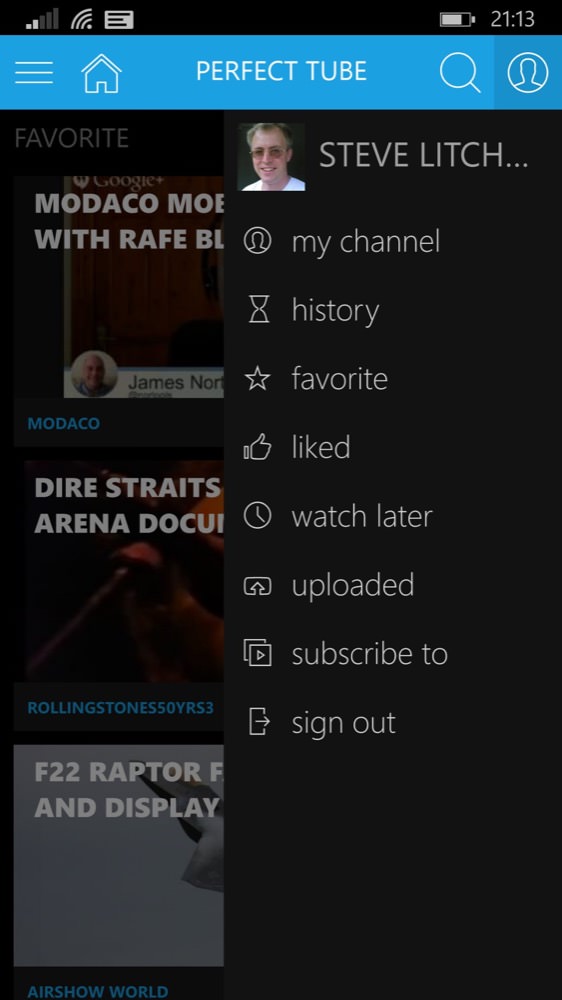 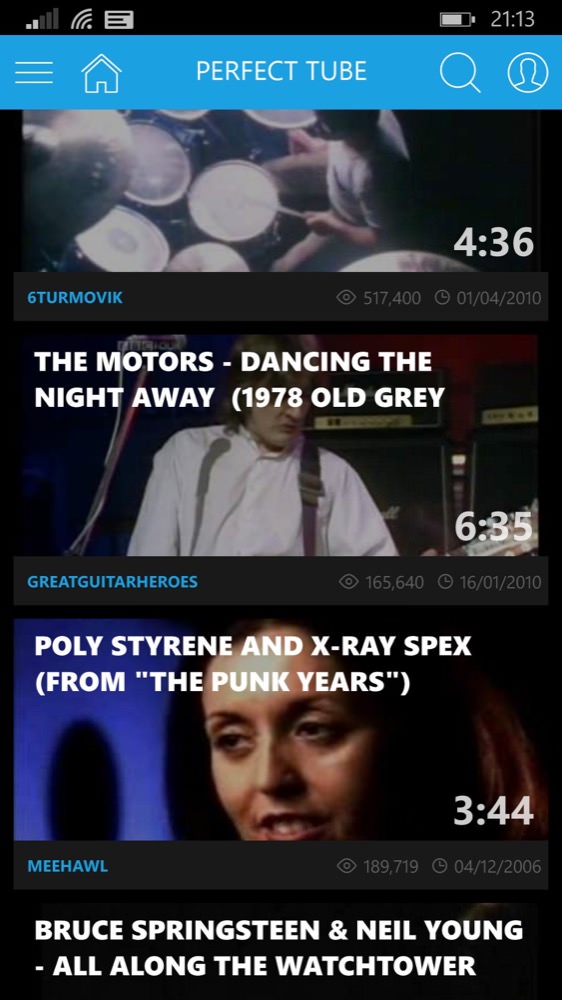 Oddly, 'playlists' aren't here, but are found on a pane under 'my channel' - hopefully the developer can rethink this - it's one of the few jarring elements in the UI.

Before I get to performance, I did find small layout bugs here and there - as shown below, left, video titles in some views can get truncated. Also shown below is a typical layout for video comments, which could benefit from more contrasting text colours (e.g. whiter) and less 'black space' (like white space, but here with a dark theme!) And, for LCD-screened phones, I have to admit that a white theme for the whole application would be a nice option: 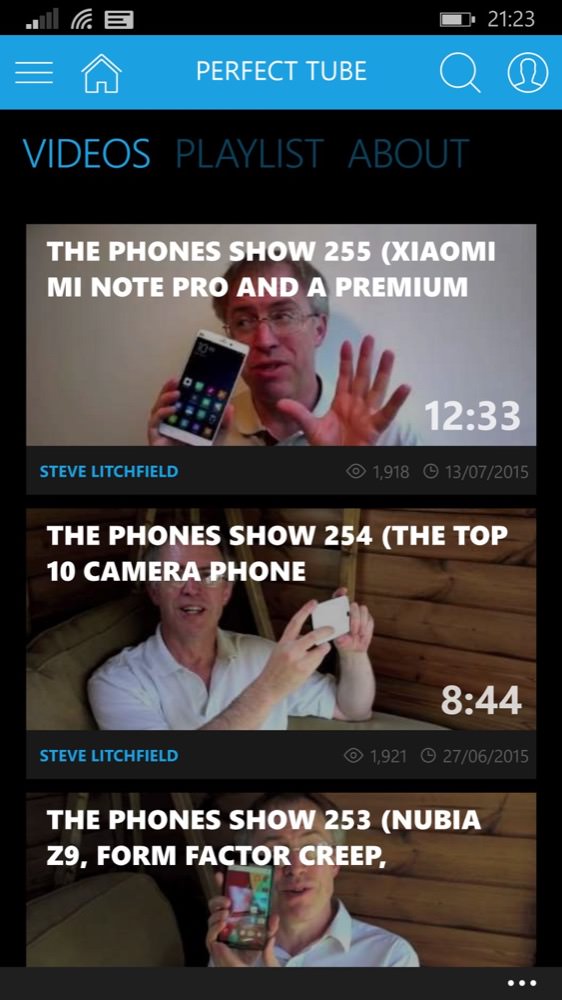 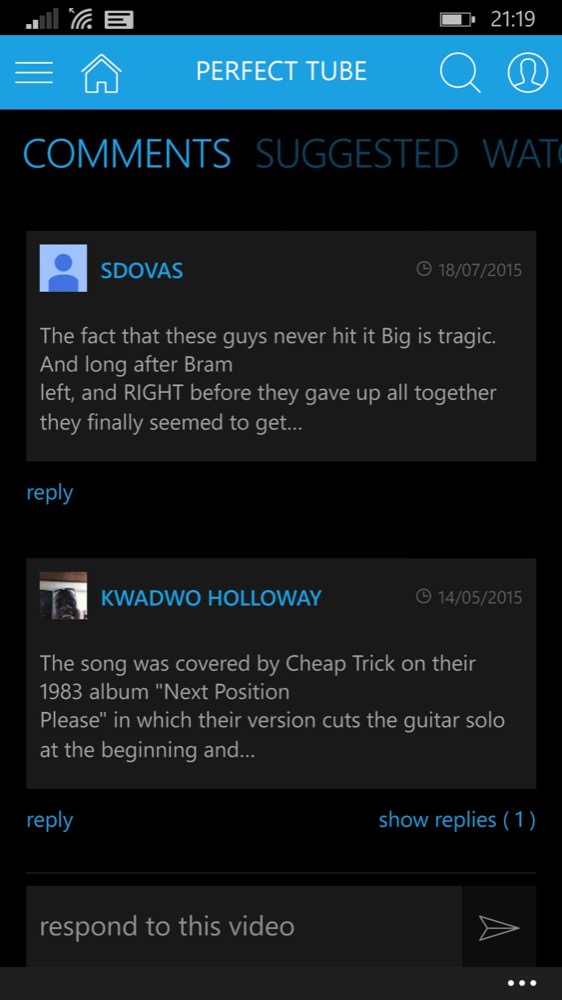 While playing, videos are accompanied by a wafer thin timeline bar along the bottom - while nice to have if needed, it's a bit much to have this on permanently, and it jars when watching something in a dark room (e.g. enjoying a music video here): 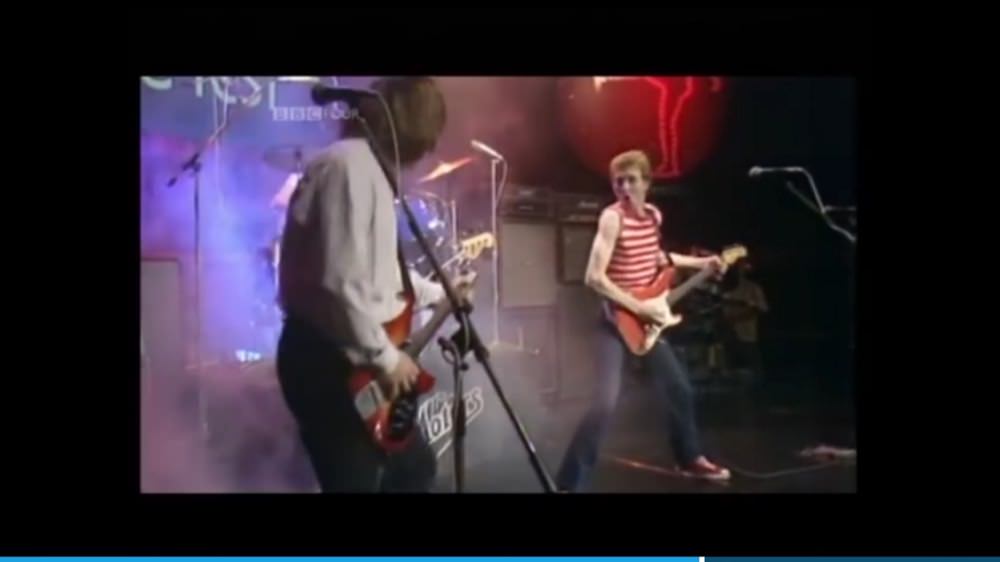 As a rule, on my test Lumia 930, Perfect Tube coped with selecting YouTube videos and then playing them from the start, but I started to hit all sorts of issues when trying to control them dynamically. Trying to adjust playback position with a swipe results in a nice on-screen timecode change, but it's rarely matched by the playback following suit. Many times I was faced with a 'stuck' static frame or the video resetting to the beginning. Then, with a video playing in the thumbnail view while i browsed around (e.g. reading through comments or lining up the next thing), playback would stutter and repeat every time.

Curiously, on a lowlier Lumia 830, with relatively slow and limited processor and GPU, things were a lot smoother, which makes no sense at all. At least it shows that processor power isn't the issue and that more testing on a wider range of devices by the developer is needed. Certainly, being broken on the Snapdragon 800-powered 930 is a little awkward.

Finally, given the capabilities of the other YouTube clients mentioned and linked above, I have to mark Perfect Tube down slightly for not having a 'Download' (or at least a caching) facility, this being relatively trivial to add (witness the number of YouTube downloaders for every platform and web browser), and for not having any 'casting' facility (e.g. to ChromeCast or Miracast).

Of course, it's early days for Perfect Tube - I remember how glitchy Tubecast Pro used to be and I remember how underwhelming the first version of MetroTube was. So let's give developer Perfect Thumb the benefit of the doubt - I'll leave the application installed and we'll see how it develops as we head into the Windows 10 Mobile era.

As for you, hey, it's free, so you can do the same. And do let us know how performance is on your device!