Anatomy of a Lumia photo #16: Steaming to the sea-side

In this latest 'Anatomy' imaging feature, I look at ways to 'think differently', in terms of angles, framing and positioning, to capture memories and create interest. My subject this time? A steam train heading off to the sea-side, though I was hampered by overcast conditions - not that this put me off!

My series 'Anatomy of a Lumia photo' (here's #1) has proved popular, even though I cheated with the HP Elite x3 instead for #2. #3 had a lovely clock, #4 was all about framing, in #5, I got down and dirty with nature, in #6 I had a rosy dilemma to solve, and in #7 I took a satisfying low light snap in appalling weather. In #8, I got extremely close to an impressive moth, in #9 Andrew Elliott was in Budapest at night, in #10, I was shooting in early morning sun, in #11, I shot 'wide', with a little help from Panorama mode, in #12 I kept repositioning and zooming until I got a water fountain just right and in #13, Jeff Appleton got a good look at The Northern Lights. Then, rounding off the series for its previous run (in 2017) was #14, looking at a glowing tower. Resuming in 2019, here's #15, looking at framing a waterfall and pond.

For the subject of #16, the utter uniqueness of the subject matter was a hindrance, in that just about everyone and their dog were taking photos of the steam train. It stays put, exudes steam and character, you can pose in front of it, so why the heck not? Except that everyone takes the same photo, from just in front and on the platform, so everyone's photos look alike and not as special as they could be. (Well, apart from the offspring posing!)

So my challenge (to myself) was to tell the story of the train in a single image. What could I come up with, armed with my trusty Lumia 950 XL? 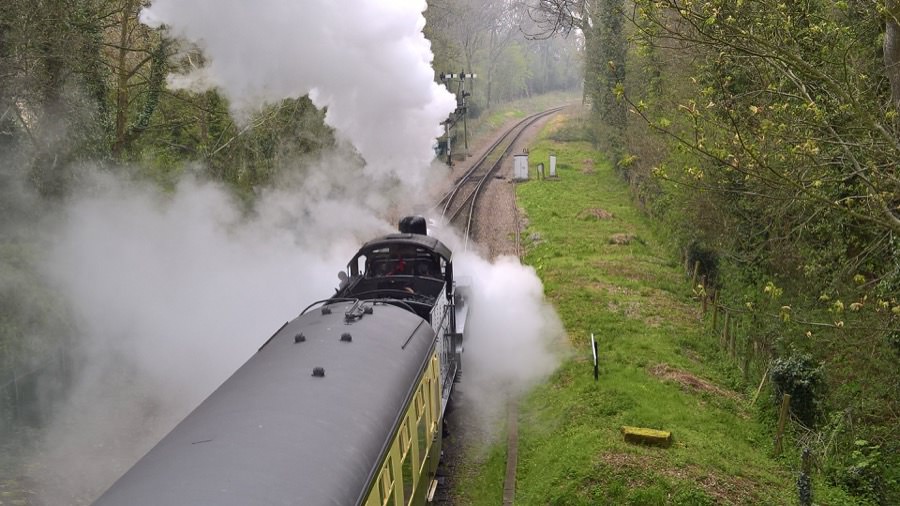 Considering the poor light, I was pretty happy with this, but let me take you through my thought processes, the 'story' behind the image, if you like, in the latest in this 'Anatomy' series.

Here's the scene on an overcast day at WSR Bishops Lydeard, anyway, the usual tourists and train spotters! The chap in green is going for the standard snap, at head height in front of the train and still standing on the platform: 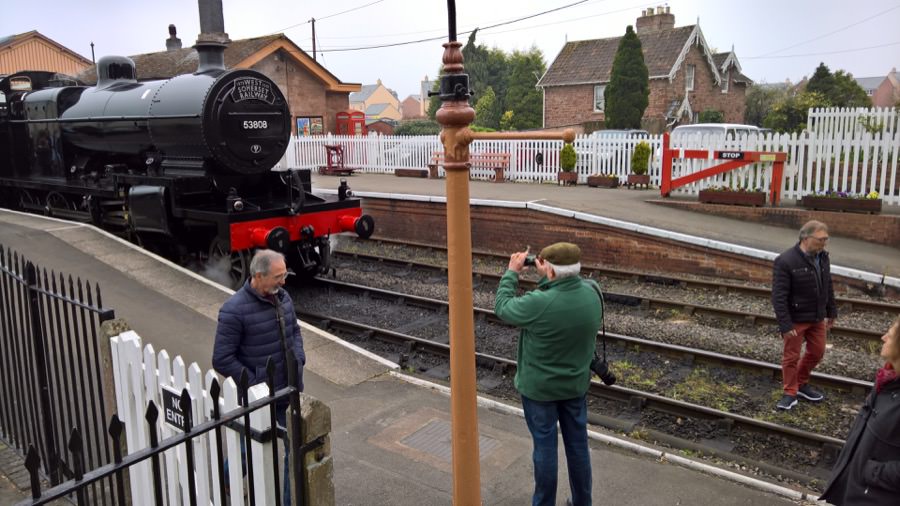 Just to give you an idea what he was shooting, here's the bog standard steam train shot from this vantage point: 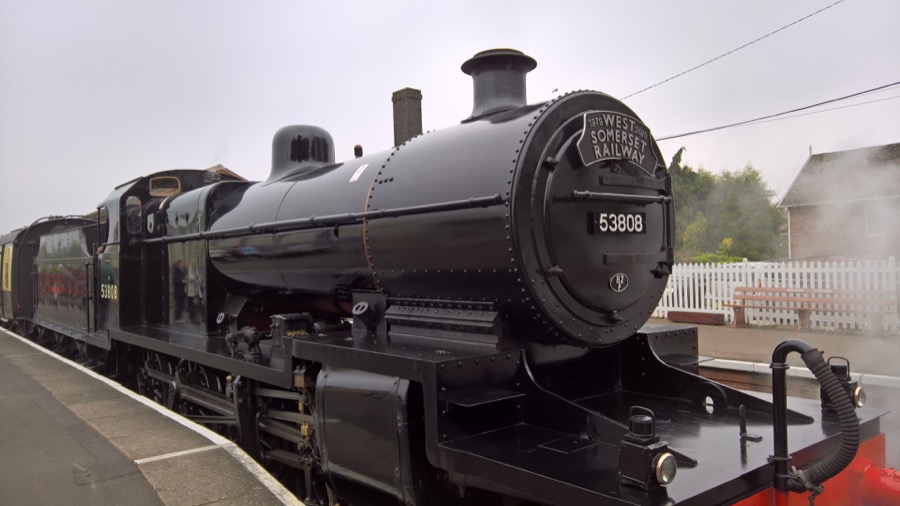 It's tough to get all the main features of a steam train in without putting yourself in danger, but this is about as good as you can get from here. Still a nice shot (for train lovers, anyway). But I wanted to try something different, so I headed down onto the track (and hoped I wouldn't get shouted at by the staff!) 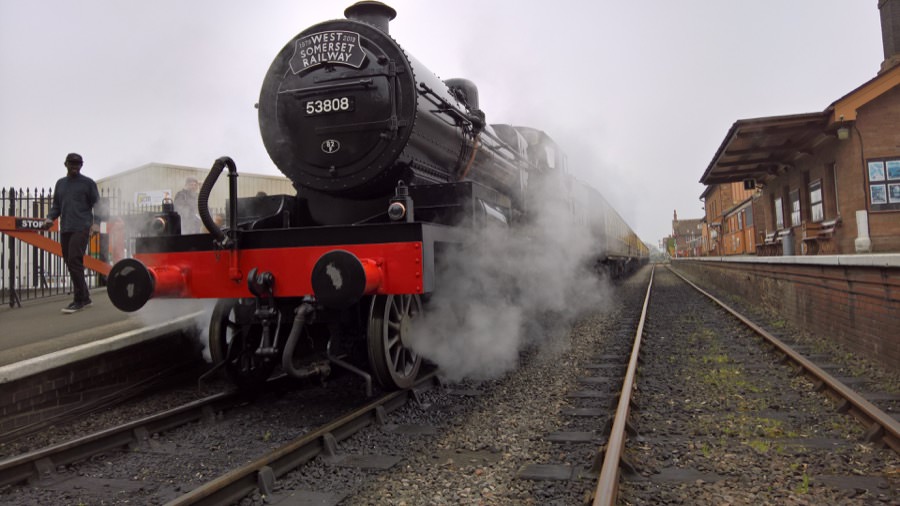 Much better - atmospheric and dramatic, though the mass of white in the sky was disappointing - if only it hadn't been cloudy. I needed to think again!

What about a panorama shot from the other platform? The Lumia 950 XL is excellent at producing such panoramas, at least for landscapes.

Unfortunately, the obviously twisted perspective in such panoramas doesn't do the straight edges in a steam train any favours and the shot above is nothing but a novelty.

And then I started thinking about telling the story of where the train was heading. Moving further along the opposite platform and framing so that the bridge was in shot: 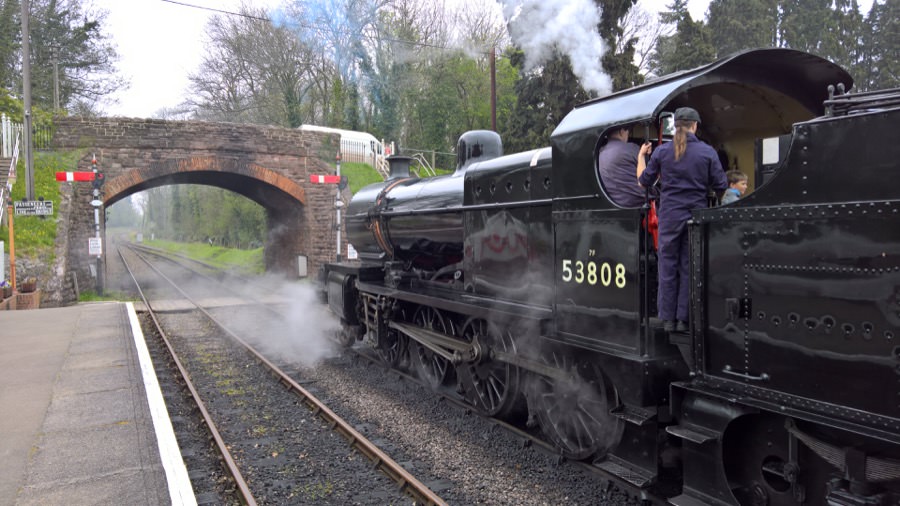 I liked this a lot - a sense of power and purpose, it's my second favourite on this page, even though it doesn't show the front of the train, traditionally the 'money shot' in steam photos.

One minute until the 'off' and one last standard shot from the steps up to the bridge, offering a bit more vertical perspective and less (cloudy) sky: 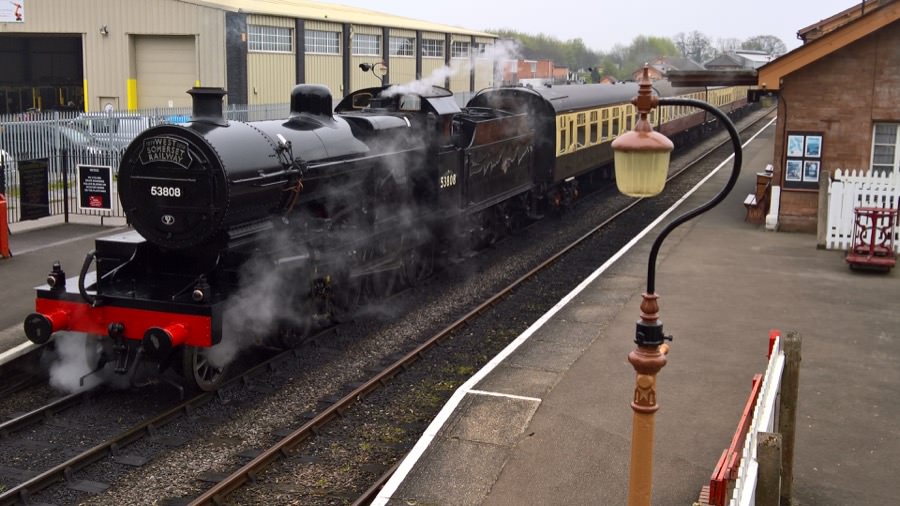 Very nice, but little in the way of art or storytelling. Which left... the bridge. I nipped up onto it and waited until the train appeared beneath: 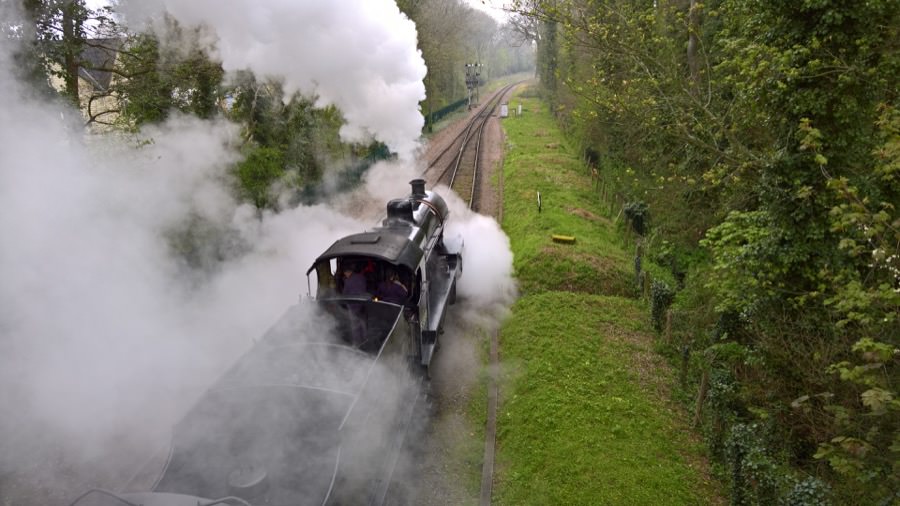 Definitely potential here as the steam train chugged off (slowly) towards Minehead, the sea-side. But all I had was the train engine and the tender - no hint of passengers off to play on the beach. A few seconds later, a carriage came into view so I tried again: 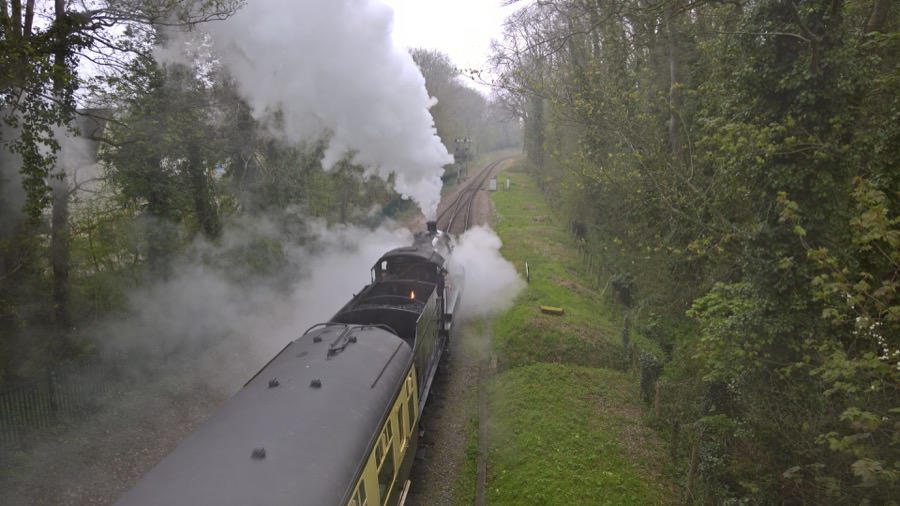 Not bad, but the photo looked too 'ordinary', with a 'snap' wide angle field of view. Remembering that my Lumia 950 XL had a little (1.5x) genuine lossless zoom, I swiped up in the viewfinder to take advantage of this, effectively cropping in more tightly on the departing train and giving the impression that I took it while hovering behind it and off to one side. No drone needed, though, this was just 1.5x zoom:

In addition to feeling a bit more involving, the zoomed shot also eliminates the sky, meaning you don't notice it's a horribly grey cloudy day. In fact, the lack of sunshine means that there are no harsh shadows - just lots and lots of England's 'green and pleasant' land.

So there we are - passengers off to the sea in a moody and lush green English landscape, captured from an unusual angle. That you can hardly see much of the steam engine itself isn't important here - you get a real sense of its activity and destination. Your eye is drawn along the train to the lines converging and curving off into the distance.

You can grab the original JPG for your own analysis here. Looking at this myself, I can see zoom artefacts, so clearly I went further than 1.5x. Oops. Still, as long as you don't demand pixel perfection, I'm pleased with the result. These Anatomy articles are more about capturing moments and moods!

Filed: Home > Features > Anatomy of a Lumia photo #16: Steaming to the sea-side