In addition to the Fast ring for Insiders, Microsoft has its own internal rings and test releases of the Windows 10 SDKs, meaning that keen developers can sometimes get a heads-up on changes that are heading everyone’s way. In this case, it’s Gustave M., with a screenshot seemingly showing that support for (ye olde) Silverlight applications is being dropped in an upcoming version of Windows 10 Mobile. 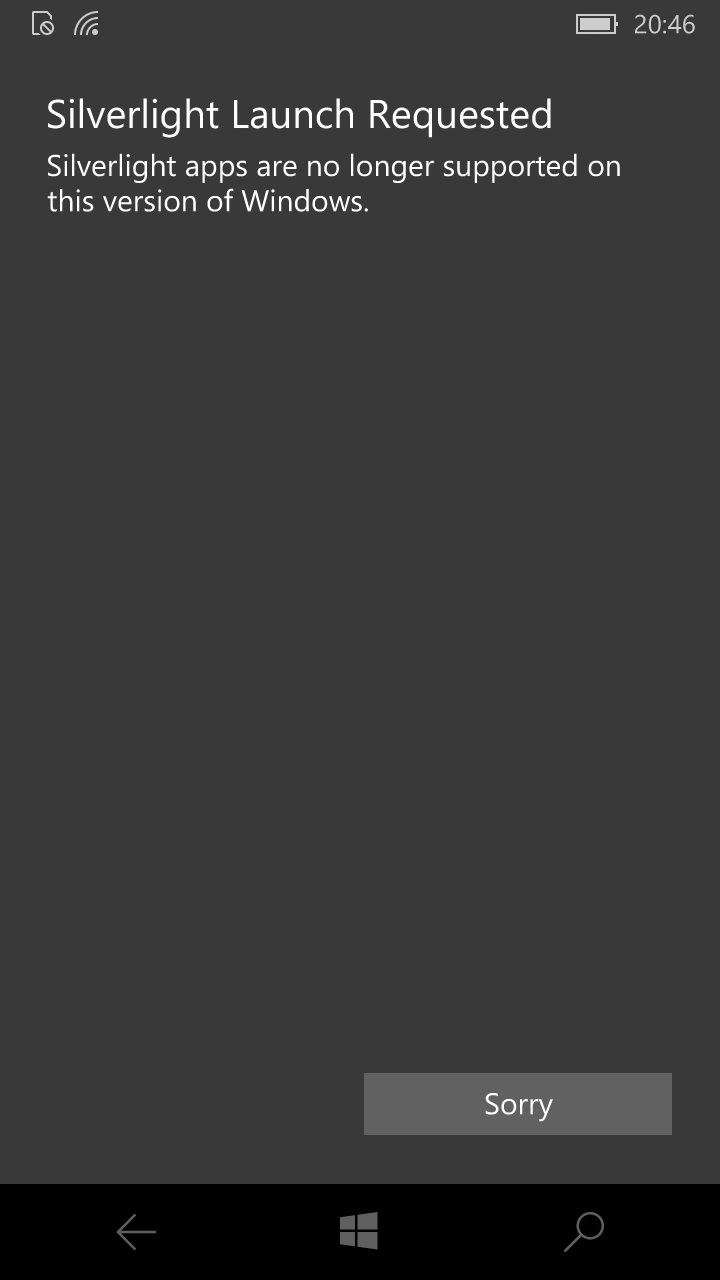 Gustave hasn’t given details, but it wouldn’t surprise me hugely if this was implemented in the new ‘feature2’ branch, currently being used by Fast ring Insiders on compatible phones.

Silverlight was/is Microsoft’s competitor to Adobe Flash (yes, yes, hated, but it was ubiquitous in the 2000s) and never really took off in a big way - most people (around these parts) will have seen it mainly mentioned as the way to code up applications for Windows Phone 7.x and then 8.0 back in the day (2012-2013). A Silverlight compatibility layer was added to Windows Phone 8.1 and also retained for Windows 10 Mobile, so that older applications could still be run on the newer (2014 onwards) OS, but Microsoft has been emphasising for the last three years (to developers) that Silverlight was a dead-end and that applications should be coded as ‘universal’ Windows RT apps or, more precisely and recently (2015 onwards), Universal Windows Platform (UWP) apps.

Regular readers will remember that I’ve run numerous stories on old Silverlight applications (i.e.those that appeared in the Windows Phone 8.0 and 8.1 era) being dropped by third parties, eager to reduce their support costs for a dwindling user base. In each case, I’ve tried to point out that these have been applications which haven’t been updated for years and that the services/companies concerned can now usually be reached just as well (or better) within the Edge browser or (hopefully) in new UWP applications, either available or in development.

So, in that context, with Silverlight applications generally being around three to four years old, it’s not at all surprising that the compatibility layer is being removed for newer Windows 10 Mobile builds. It’s something which simply isn’t needed anymore. 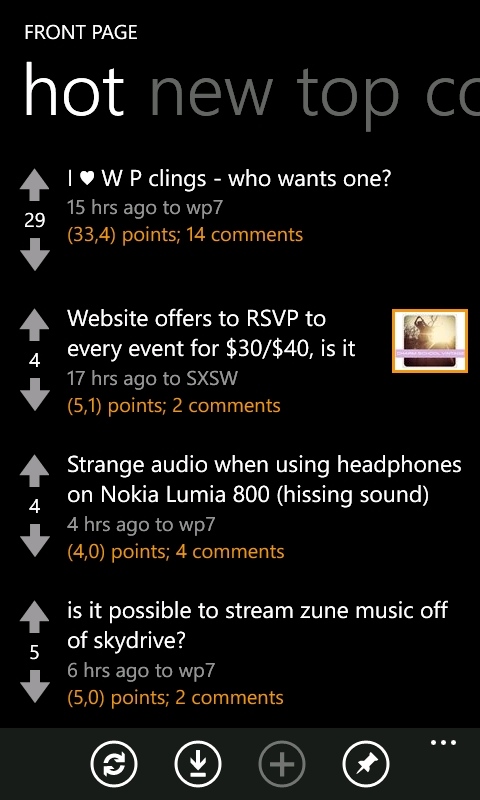 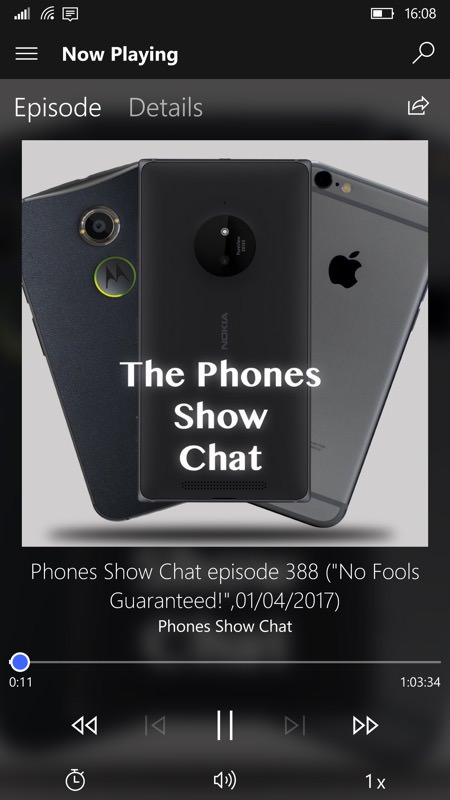 Examples of apps: Silverlight-based, Baconit, from 2012; and (right) Grover Pro from 2017 - although the apps are very different, note the slimmer UI elements, the ubiquitous hamburger navigation menu, the UI transparency. The former UI was fine on smaller 2012-era screens, but looks clunky at 5.7", for example, in 2017.

Of course, there will be a handful of enthusiasts complaining that an old, favourite Silverlight app from ‘the old days’ no longer works, but I don’t expect much of this. After all, the builds concerned (e.g. future ‘feature2’ builds) are only going to be seen in the short term by Fast ring Insiders, the demographic who will be all in on Windows 10 and UWP applications across the whole ecosystem. For them, old Silverlight applications (which still populate the Store, annoyingly) are an anathema, with a styling that simply doesn’t fit into the modern Windows 10 design language and themes.

Looking at my own Windows 10 Mobile-running phones (my 950 XL is the heaviest populated, so I’ll use that as the example), I have over 40 third party applications installed and I’m struggling to find any that are based on Silverlight. ‘MetroPass’ has the old 8.1 style, but may or may not be affected - it’s hard to tell! In that case, there are several UWP Keepass clients now, notably KeePassReader and KeePassWin. There’s 'Picture Info' and 'Photo-Info', again both with 8.1 style but I believe that only the former is Silverlight-based. But again there’s now good EXIF data support built into Windows 10 Photos itself (on the ‘i’ control in the toolbar) so these old 8.1 applications (borne of the incapabilities of Windows Phone 8’s Photos application) are not needed anymore.

And… that’s it. For my phone anyway, there’s nothing Silverlight-related that will suddenly stop working if I keep my 950 XL on the Fast ring. Comments welcome if you can think of an example, an important application which is Silverlight-based and still widely used. I’m firmly set up now with a barrage of UWP apps from third parties (think myTube!, FeedLab, Tweetium, Grover Pro), plus all the Microsoft first party UWP titles, and the thought of a purge of the OS so that Silverlight items from the past don’t darken my door with their low res toolbars is actually quite tempting(!)

Not that all production users of Windows phones will be as enlightened in terms of using modern UWP (and native WinRT) apps, of course. But people with (say) Lumia 735s, 830s, and 930s, they’ll stay on the Anniversary Update (Redstone), unless they choose to move up further with an Insider ring, and will be two steps away from the Silverlight layer removal. Those with (e.g.) Lumia 950 or 650 phones will have been officially upgraded to the Creators Update (Redstone 2) and this will also maintain that Silverlight compatibility layer. So they’ll be one step away from the break in compatibility with these pre-2014 applications, and again they’ll be happy, using an old favourite without a care in the world.

In summary, if this tease from Gustave M (who is reliable, if not forthcoming with more details yet!) is something being implemented in ‘feature2’ or ‘Redstone 3’ then it won’t have a significant impact on anyone. And if the removal of the Silverlight compatibility layer helps streamline Windows 10 itself then I’m all for that. We’ve already seen performance improvements for the Creators Update and my test devices will only get smoother again, surely, with one less bit of backwards compatibility with the distant past taken out the back and quietly shot.

PS. After some confusion in the comments below, I thought I'd update my current understanding of how the various app develeopment technologies fit together in terms of compatibility: